I have been baking sourdough bread since the last millennium, long before it became the hip COVID lockdown hobby.  Over the past three decades I’ve gotten pretty good at it, if I may say so myself, my weekly loaves both tasty and attractive.

Until recently, that is.   In the past year my breads have been somewhat uneven – edible, sure; but often flatter and denser than I’d like, not good-looking at all.   This skill I’ve honed for thirty years has become suddenly elusive.   Athletes have a word for this – when the pitcher’s arm falters, the golfer’s swings become erratic.  They call it the “yips.”

I have the yips.  The bread yips.

I bought my sourdough starter in 1992, from King Arthur Flour.  That was in the dark ages before online commerce was really a thing, when you had to order stuff from an actual catalogue printed on real paper.   You filled out a form (with a pen!), put it in a little silk purse with a few gold ducats, tied the purse to the leg of a carrier pigeon, and hoped for the best.

In my case, it worked out:  thirty years later I’m still baking with that same starter, shared and refreshed countless times.   I bake loaves that are predominantly whole grain, because they are very tasty and very healthy, and because white flour is cheating.

It’s a little tricky to combine sourdough with whole grains.    Those beautiful, glossy, open-crumb sourdough loaves that flooded Instagram in 2020 are made with white flour and a very wet dough (the wetter, the better) plus a long, slow rise (the slower, the better, too).  But these strategies can backfire with whole grains.   Very wet whole grains get acidic quickly, which makes them delightfully sour (if you like that sort of thing) but results in a slack dough.   And then there are some grains which can only tolerate a relatively short rise before the gluten degrades (I’m looking at you, spelt).  It’s a balancing act:  you want high enough moisture and a long enough rise to develop flavor and an open crumb, but without so much of either that the whole thing collapses.

Tricky; but after lots of experimentation I developed a knack for it.   Here’s a glam shot from 2020: 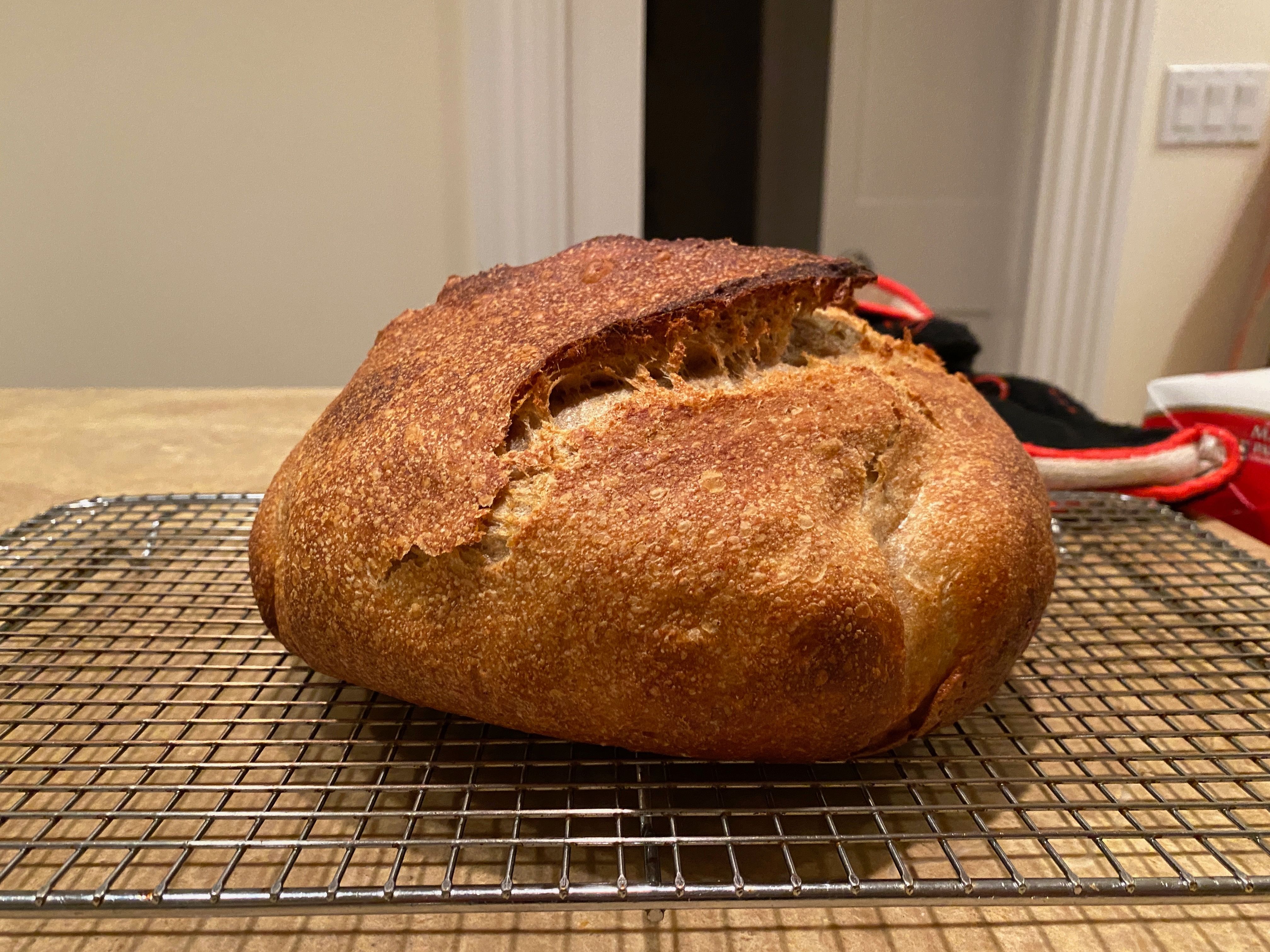 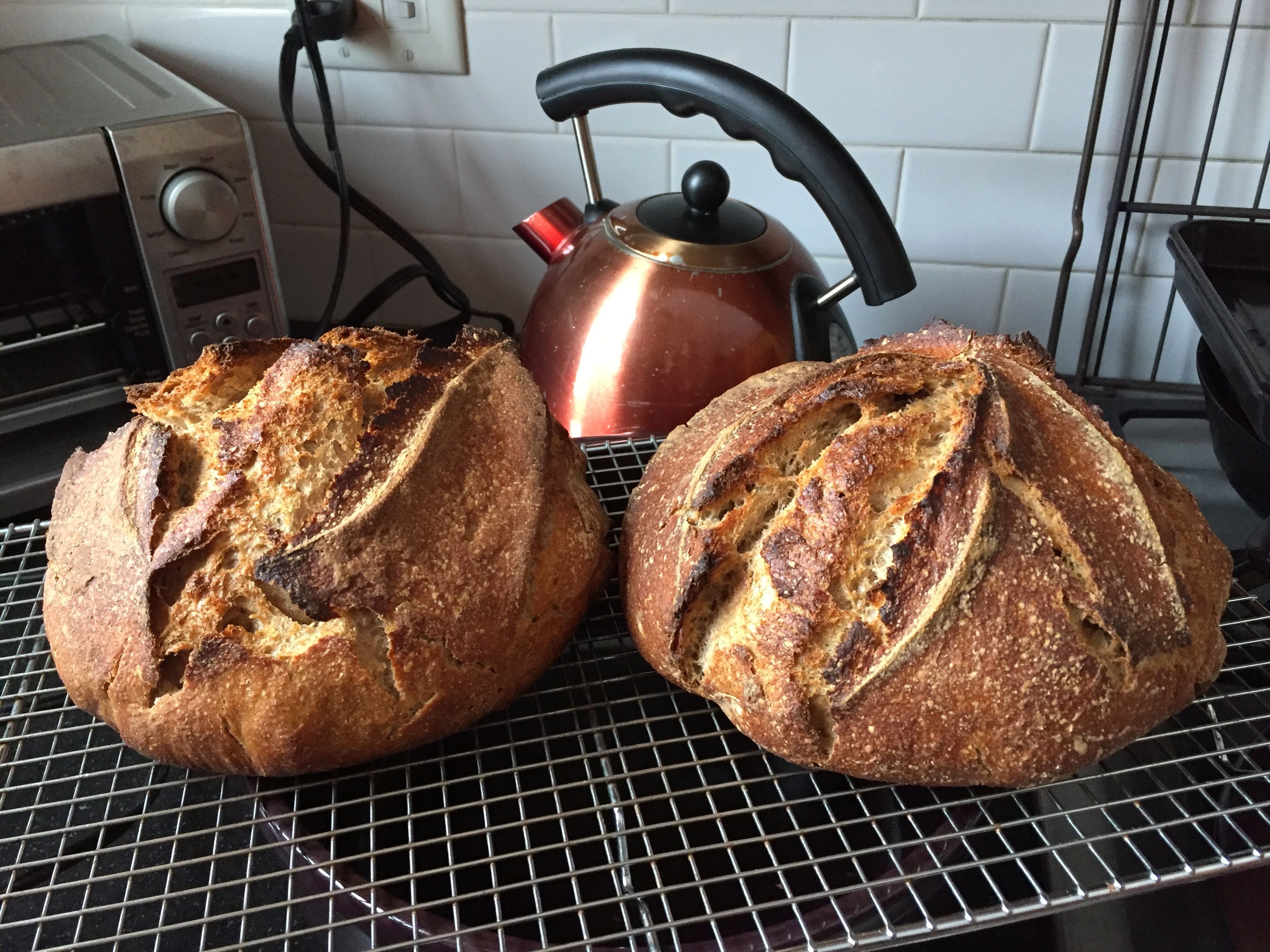 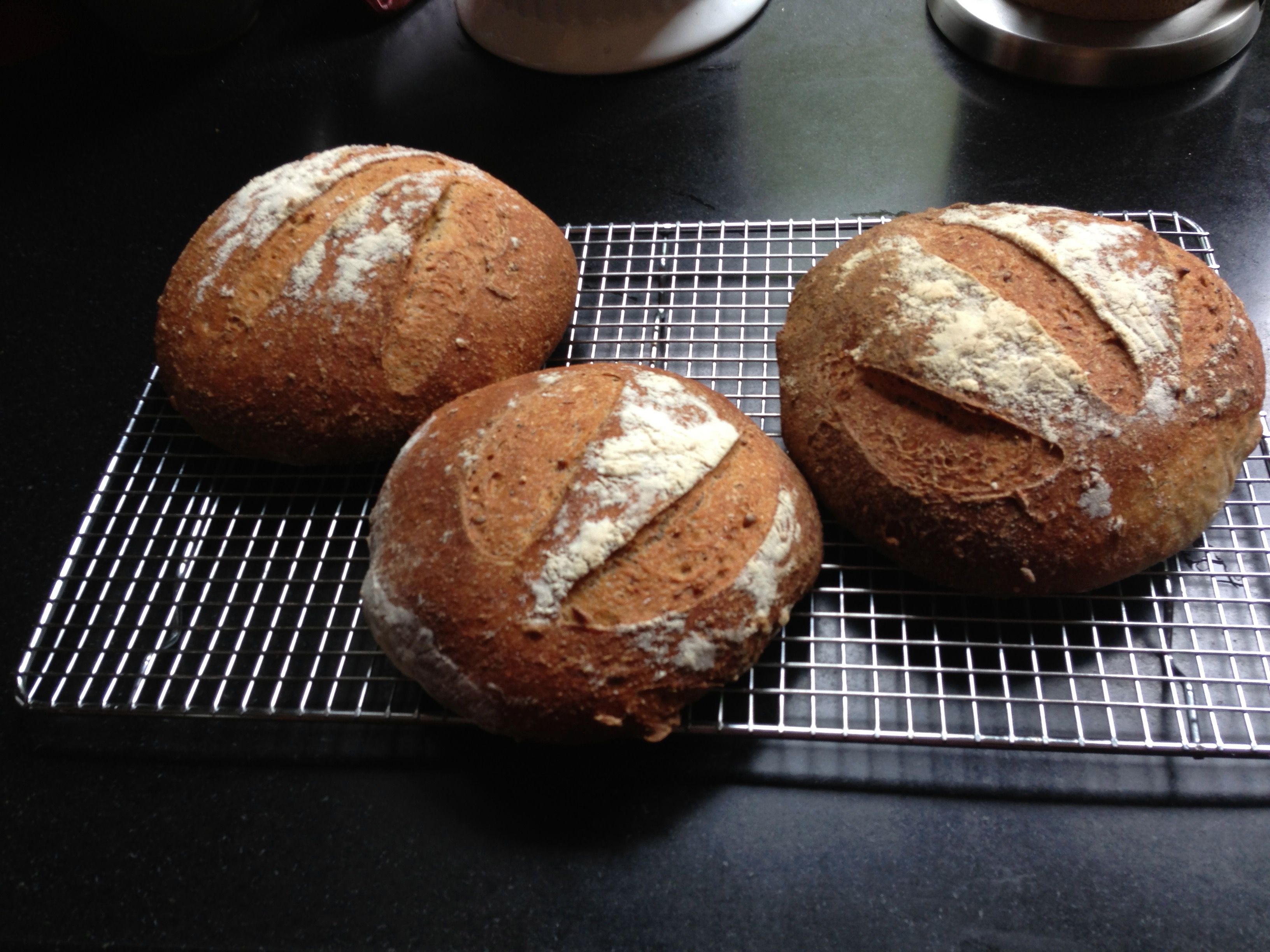 The 2013 snaps are in fact the oldest bread photos I could find, probably because that’s the first year in which I had a phone with a decent camera.   Before that, if you wanted to capture a moment, you had to whip out your quill pen and do a quick sketch on a little scroll of papyrus.

Look at this sad bread I baked just last month: 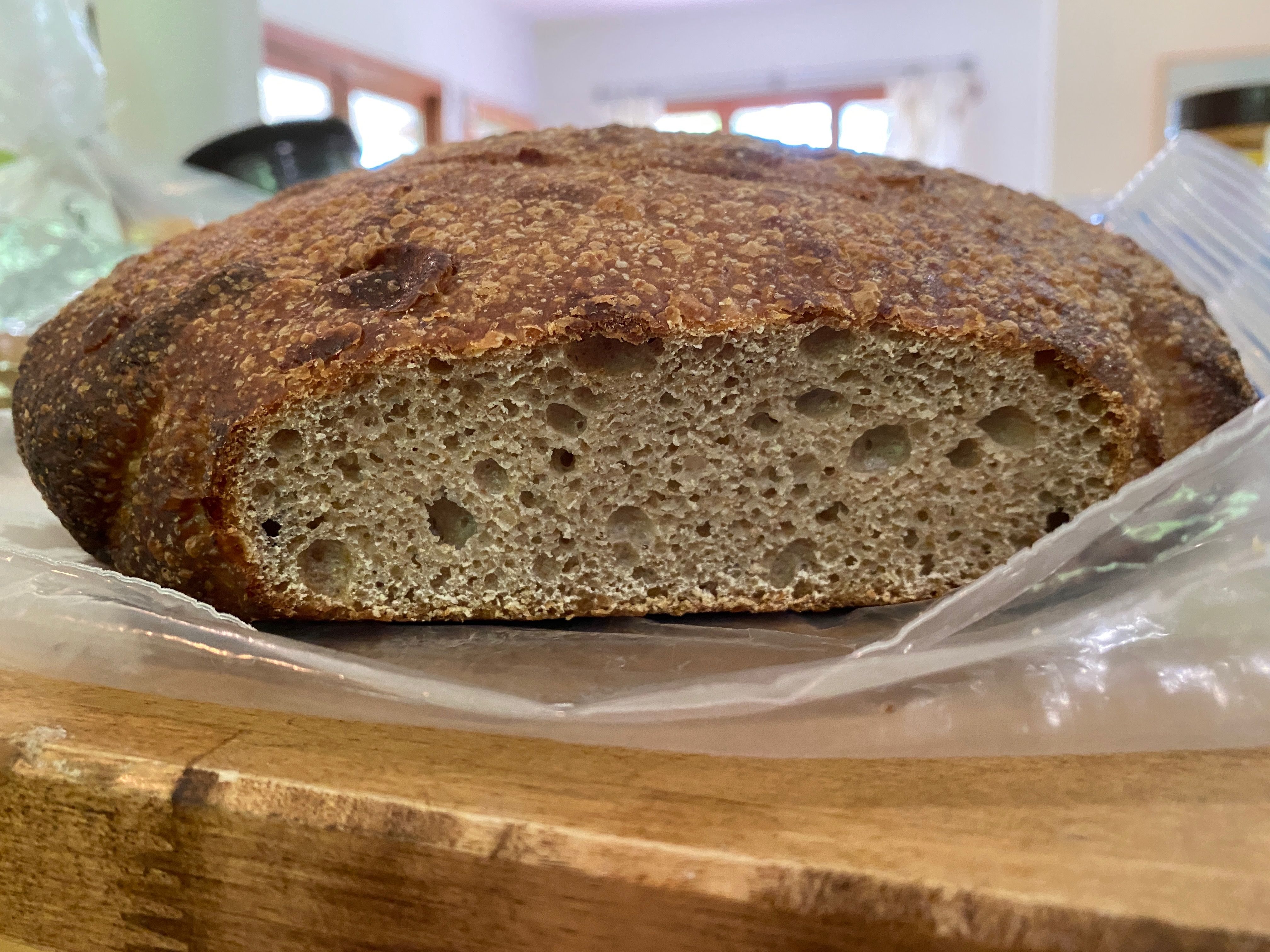 What exactly is going wrong??

Albert Einstein famously said, “insanity is doing the same thing over and over and expecting different results.”   You can buy many different posters with this quote: 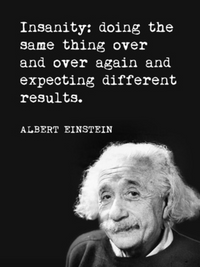 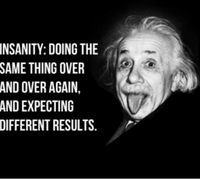 Actually, there’s no evidence that Einstein said any such thing.   As far as the fact-checkers can tell, the first published instance of this quote appeared in a 1983 novel by spunky feminist, mystery writer and cat enthusiast Rita Mae Brown. 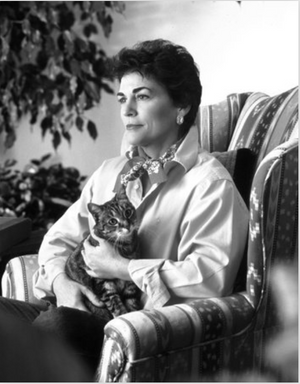 Obviously, these inaccurate Albert Einstein posters were manufactured back in the day, before Al Gore invented the Internet so that we could consult Wikipedia.   Before that, if you wanted to check facts, you had to go to a library, which involved actually leaving your house, which was often extremely inconvenient, especially if the horse-drawn phaeton was unavailable for the day because your sister Jane was using it to visit Mr. Bingley.

I digress.   If my bread results have gone from hero to zero in just a year or two, what am I doing differently?

Not much, as it turns out.  I have a baking diary that I started in 1998 to keep track of my baking efforts and to learn from them along the way. 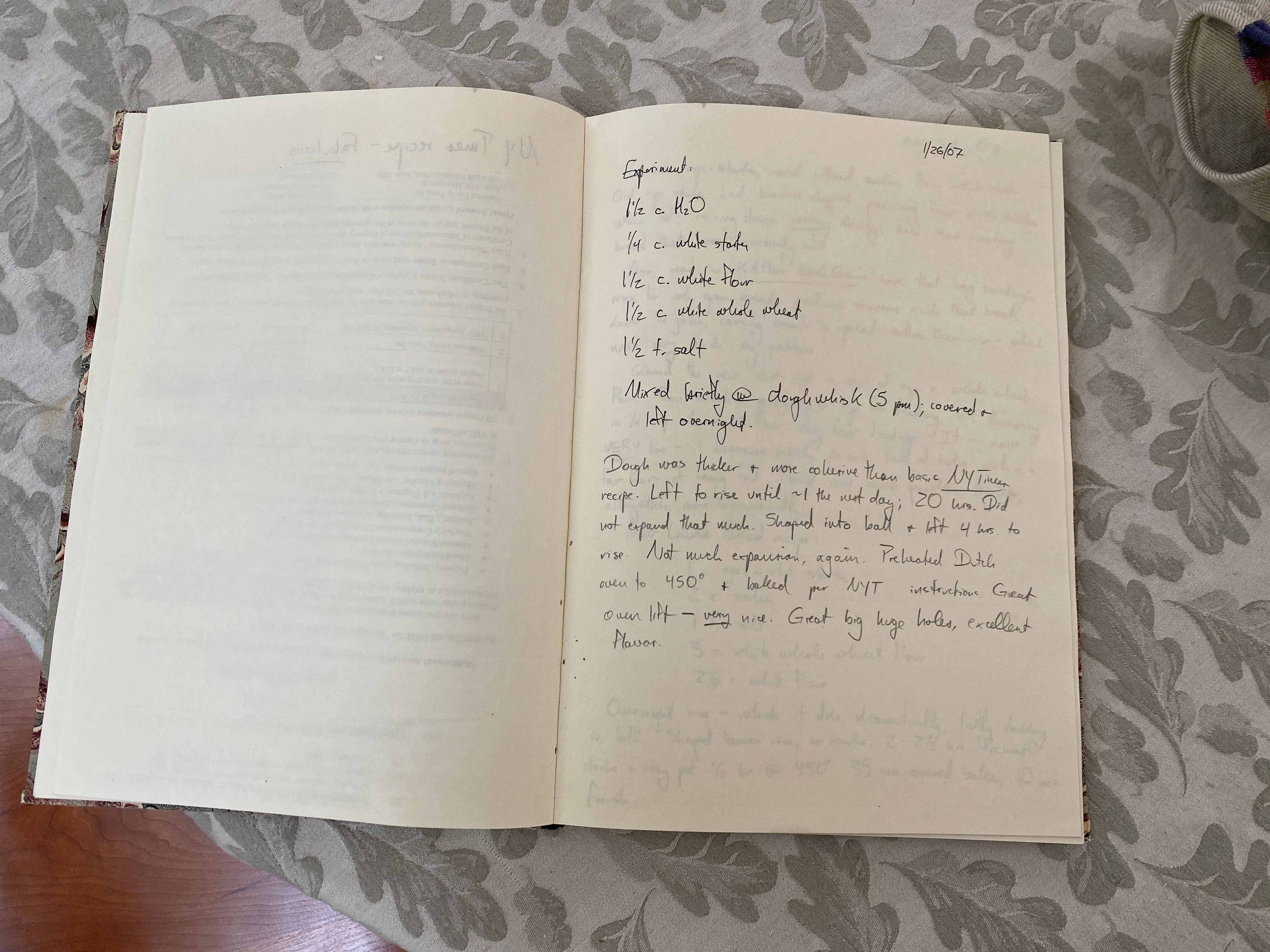 I’m still using the same notebook, so obviously I don’t write in it all that often….but often enough to verify that what I’m doing now is not materially different from what I did three or four years ago: the same ingredient ratios, the same rising times and baking temperatures.   And yet, such different results.

My point here is that the thing Albert Einstein didn’t really say about consistent actions producing consistent results just isn’t true (perhaps that’s why he decided not to say it, scientist that he was).  At least, it’s not true for sourdough, which is a living thing, a constellation of microbes that varies from time to time and place to place.   I’m baking in a different kitchen now than I was three years ago.  The kitchen in my new condo is on the fourth floor, at a higher elevation than my ground-floor kitchen in my old house:  maybe that makes a difference.  Maybe the twenty years of baking that my old kitchen had in its microbial history makes a difference, as well.   Maybe there is more moisture retention in the fridge where I now store my flour, so the same amount of flour by weight contains relatively more moisture.   It could even have something to do with the microbial life on the baker’s hands – my hands.

Can I really say, then, that I’ve been doing the same thing?  Is it possible to do the exact same thing in a different kitchen, in a different season, with a different bag of flour?   For that matter, with the cells in my body constantly regenerating, am I even the same person that I was in 2016 or 2020?

I am not going down that rabbit hole.    Regular readers of this blog know how I feel about rabbits.

As I’ve been working my way out of the bread yips, I’ve come to realize that the problem is not that I’m doing anything differently – but that I’m not doing things differently enough.   I need to work not by recipe, but by muscle memory: to draw on my thirty years of experience with how a properly-hydrated dough should feel when you knead it, when you shape it; how it’s supposed to look when you finally pop it in the oven.   In the last few weeks, as I’ve started looking more at the dough, rather than at the scale or the clock, the results have markedly improved. 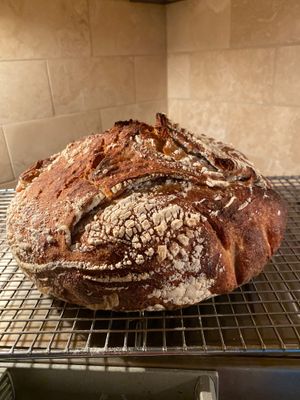 I can’t reproduce the lovely loaves of the past.  I can only do the best I can with the starter and flour I have today, in the kitchen where I’m baking now; and I do better the more attention I pay to what I see and feel in the moment.   It is time to stop and smell the starter.

There’s a life lesson in these bread yips – maybe more than one.  To wit:

And when you tie the silk purse with your order form to the leg of the carrier pigeon, make sure to use a double knot.