Gratitude and Non-Attachment in the Veggie Patch

In these last two years of dislocation and loss, I have practiced a lot of yoga.   Woven throughout have been two central themes of any meditative practice:  non-attachment and gratitude.   We are happier and better people when we can be appropriately thankful for what we have, and when we can let go of what we can’t.  Gardening provides ample opportunity to apply these lessons:  there are inevitably delightful surprises and pitiful failures.   You learn to celebrate the successes and shrug at the disappointments.

I am now in my second season with my plot in a nearby community garden, an opportunity for which I am endlessly grateful.  I have recently returned from a three-week trip out of the country (grateful for that, too).   My reunion with my little 100-sq-ft plot of heaven was a delight. Gratitude, gratitude, for the bounty I found, for the kind gardening neighbors who had watered my plot in my absence (thank you Sarah, Negar, Randy, Randy’s Husband Whose Name I Will Someday Learn!).  I was thrilled with the harvest, although I’d thought that the pole beans would have done better – last year at this time I was pulling them by the bucketload.   But here's an opportunity for non-attachment.  Mediocre bean harvest?  Let it go. I cleared away some weeds and some self-sown dill and cilantro from the base of the bean pole that I thought could be crowding out the vines.    I harvested all the garlic, which had time to cure in-ground while I was away.  In its place I planted out six lovely brussels sprouts seedlings – a big source of excitement, since I’ve never grown sprouts before.   These sprouts were the products of careful planning and research – you plant them out 12 weeks before first frost, mid-July in these parts, just the item to fill the hole left by the garlic. I’d raised mine from seed, planted mid-May, and watered lovingly in my absence by my wonderful neighbor (thank you, Sai)!    And here, in mid-July, they were healthy and leafy and ready to go (gratitude, gratitude).

Two mornings later, when I came back to water again, one of the sprout seedlings had been nibbled down to the stalks, every single leaf gone.   With the dill and cilantro cleared away, I could now see that this was in fact the problem with the beans, too:  they’d been chewed down to the bare nubbins.  By the time I returned later in the day, every single one of my sprout plants was a pathetic, leafless stalk. 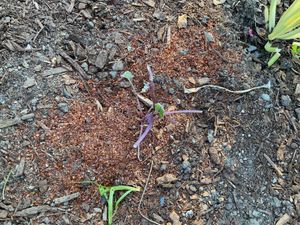 I recognize this enemy.  Destruction this complete can only be the work of Bunnies.

This, of course, is the moment for non-attachment.   I should focus on gratitude for the eggplants, the basil, the kale and the chard, for the generosity of the husk cherries and the unexpected exuberance of the cucumbers.    So the sprouts didn’t work out?   LET THEM GO.   I will be a happier and better person for it.

Fuck that.  I have a better idea.  I have chosen to focus on non-attachment to the bunnies.

When I started my plot, I put up a fence to keep the rabbits out – a rickety thing, but last year, it did the trick.  So now, faced with this assault, I go around the perimeter with my trusty garden staples, trying to figure out points of entry and secure the fence more tightly to the ground. 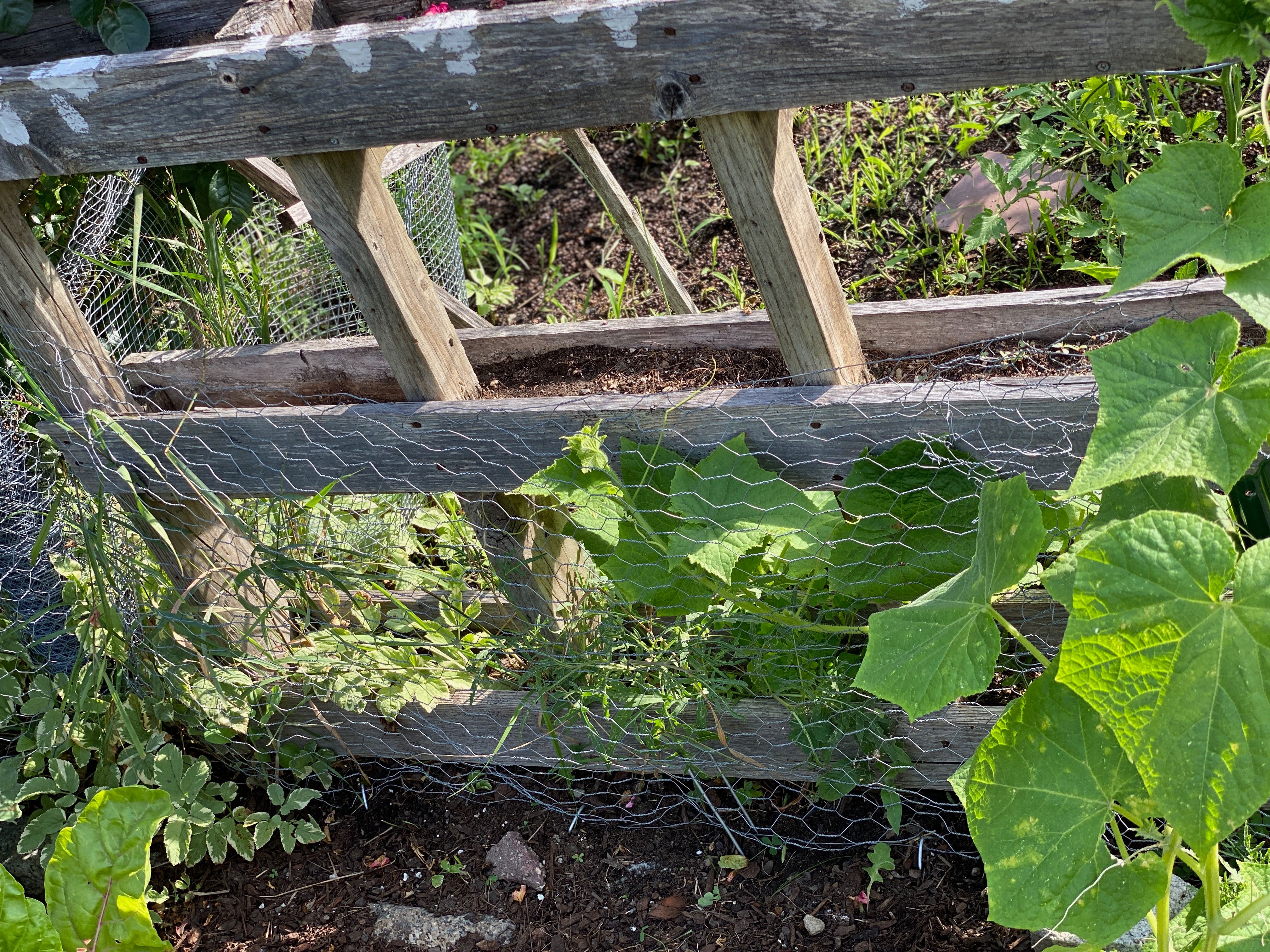 I do not, however, have high hopes.  Look at the logo on the box: 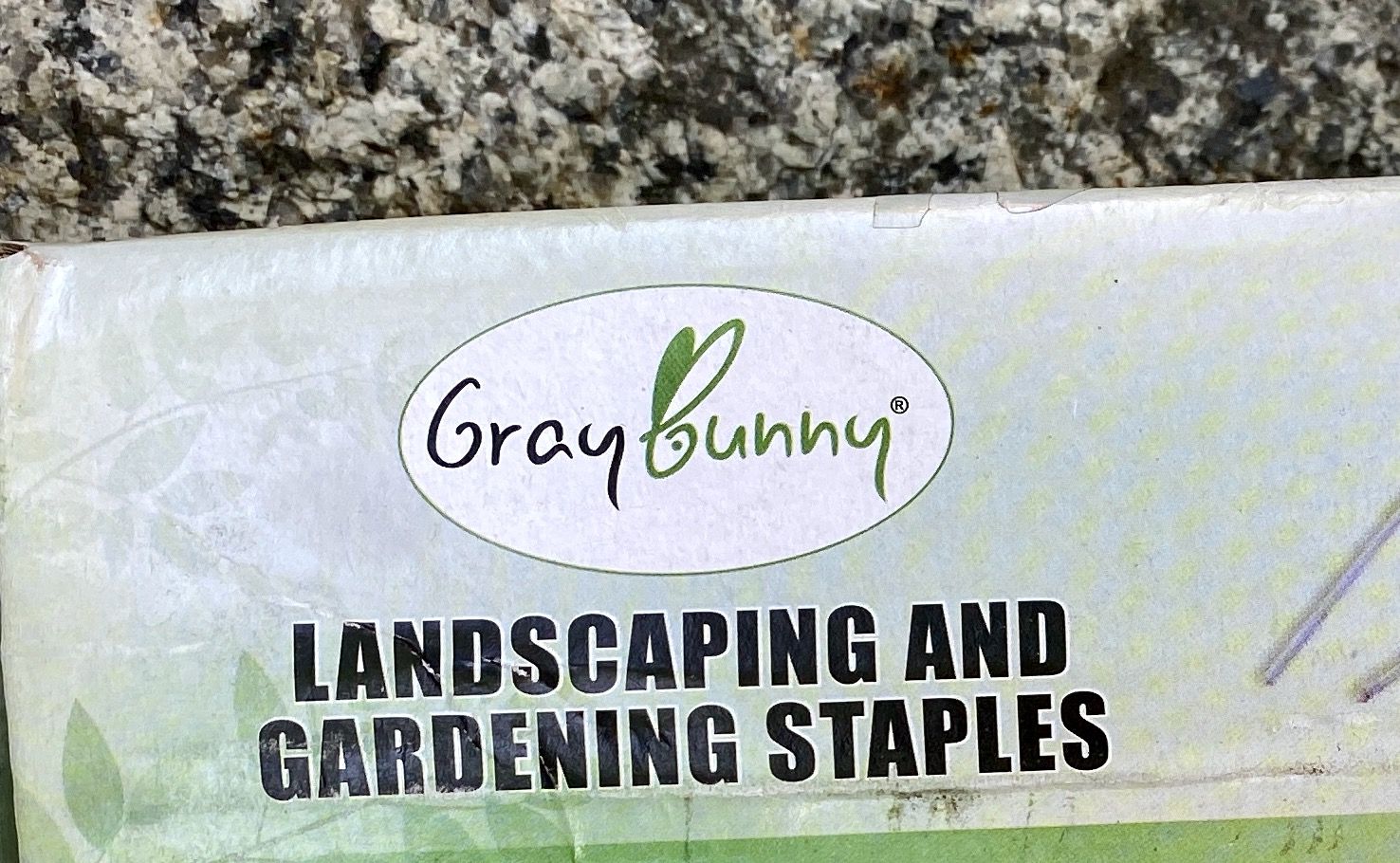 That’s right:   Team Bunny has taken control of the garden staples.   Any effort at fencing is subject to sabotage.   I need a back-up plan.

In another time and place, I could set up elaborate traps, or sit out on my porch with a shotgun, waiting for the varmints to breach the perimeter.   Neither is an option in this dense, shared urban space.  (I do, in my neighborhood, hear distant gunshots every now and again.  It doesn’t take much imagination to surmise that these shots are fired by disgruntled urban gardeners, their last nerves gnawed by pesky rabbits.)

I cannot kill the bunnies.   But I can annoy them.   After striking out at two different stores in my search for hot pepper spray, I rush home to make my own, with the spiciest pepper my cabinet can offer:   gochugaru, the Korean pepper that is responsible for kimchi’s heat.   I have a big bag of gochugaru because kimchi is something I occasionally make, and gochugaru is only sold in increments of Extra Large or Absurdly Large.  Let me say right now that my kimchi is nowhere near as good as your grandmother’s kimchi.  It is, however, way better than my grandmother’s kimchi, mostly because kimchi is something my grandmother would not have eaten in a million years, let alone made herself.    Mostly, my grandmother ate tuna melts and chocolate cake – both foods for which she would be in no way dependent on the products of anyone’s garden.   Wise woman.

Back in my garden plot, the sprayer full of homemade hot pepper wax clogs almost instantly.   I end up kind of splashing/drizzling it over the plants, and then dumping the rest of the bag of gochugaru on the surrounding soil for good measure.   And as I am splashing and drizzling and dumping, I SEE the bunny.  And I hear a neighboring gardener talking to it, saying, “oh, there you are, little bunny!    You are SO cute!   Remember how I saved you?”

Saved it from WHAT?   And more importantly – WHY???

Let me be totally clear:  there is nothing lovable about a bunny.   Forget the image of Peter Rabbit carrying off a full-grown head of lettuce.   My garden is full of mature plants that the bunny could have nibbled --- kale and chard and parsley, bunny favorites all, enough to feed both Thumper and his demon spawn.    Any of these plants could have sacrificed a few leaves, or even a lot of leaves, without giving up the ghost.  But that’s not how bunnies roll:  they only want the tender young leaves of newly-sprouted plants.

That’s right:  bunnies prey on the weak and vulnerable.  They eat babies.  I would no more call them “cute” than I would call Ginny and Clarence Thomas a “cute couple.”

There are some early signs of success.  A few days after I season my garden with hot pepper, some of the decimated bean plants are showing signs of growth.   Three of the six brussels sprout seedlings are likely goners, but the other three could potentially make it (though whether they’ll get sufficient vigor to send up stalks of sprouts this fall is anyone’s guess).   I will need to be vigilant, though, if I am to non-attach the bunnies from my garden plot.   I am grateful, very grateful, for the hot pepper spray I finally found at Store #3. 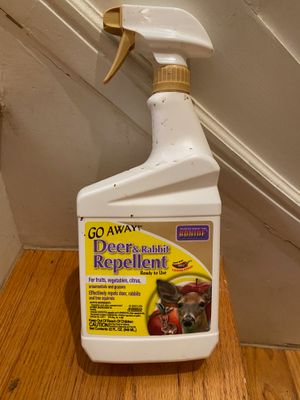 I will stay on the case, spraying and sprinkling more hot pepper after every watering and rainfall, and I will hope for the best.

Come to think of it, while I'm at it, I’d also like to practice non-attachment from Ginny and Clarence Thomas.   Think I can find enough gochugaru at H-Mart?