Before I moved into the city, I had a garden.   It was not a large garden by suburban standards:  150 sq ft of vegetables, maybe 50 sq ft of herbs, some perennial beds.  I gardened it intensely, obsessively.  I grew all my veggies from seed.  I waged war on the bunnies. I weeded and divided and replanted.  It was beautiful, and I loved it. 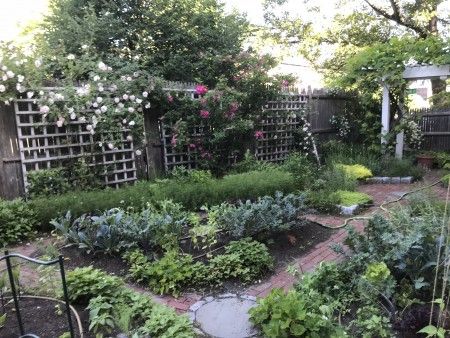 Now I live in an apartment on the second floor, and my proprietary outdoor space is limited to a 6’ x 12’ balcony that gets four or five hours a day of very intense sun.    I garden it intensively, obsessively.  I have a line of windowboxes on the railing; no veggies, but pots full of culinary herbs.   It is beautiful, and I love it. 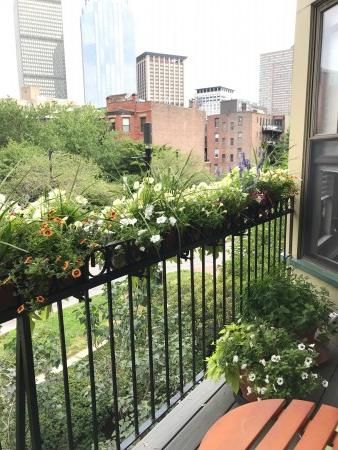 I can honestly say that I don’t miss my garden, though it gave me enormous joy for 21 years.  My back certainly hurts a lot less.   Plus we are blessed to live on the edge of Boston’s Southwest Corridor, a long pedestrian thoroughfare and park that is full of beautiful plantings and community gardens.   So I surrounded by trees and flowers, lovingly tended by an army of volunteers (an army in which I will likely enlist at some point).

I see the bunnies scampering about the park.   Of course, they can’t make it to the second floor, so my parsley is unmolested.    Now when I see the cottontails hopping across the grass, I just think, “oh, how adorable!”

We are so easily seduced by evil.

One of the great things about the balcony is that it provides for top-notch people-watching.   There is a group of elderly Chinese women who march by every weekday for their morning exercise; they pass by our building at exactly 8:10.    There are periodic parades of summer camp kids, a church group now and again, lots of people passing through on their way to the train or the bus.   An endless stream of dog-walkers.   The occasional drug deal.  Lots of parents and toddlers, a major neighborhood demographic.   From here I can certainly tell you how the South End is raising its children.  (The main strategy seems to be moving to the suburbs before they hit school age.)

And there are moments of human drama.   People live their lives in public in the city, airing all manner of dirty linen and assuming anonymity all the while.   One night I am taking out the trash and I walk right through a heated battle between a woman and a man who is presumably her boyfriend.  To be more accurate, he is apparently a f@*&#!?! #@$&^*#, who has the @#$)(*#@&) NERVE to have @#$)(#&$ !)(!&@# that @?*@U#)!@(*.  Even with my best efforts at eye contact avoidance, it is impossible to ignore this interaction; I have to walk right through it.

But truthfully, unless these people are wearing the same clothes and having the same argument in the same spot, there is no way I'd recognize them if I were to see them again.

On an errand I walk the whole way behind a young woman who is debating two job offers with her phone.   There is not only salary to consider, but cost of living issues, upward mobility potential, networking options.   By the time we both reach the Hynes Convention Center T stop I am ready to say:  “Take the New York job, already!”   I don’t, because that would be creepy.  But the New York job was clearly the right choice.

I never did see this woman’s face.   Unless she happens to be walking in front of me again, in the same gray tank top and burgundy shorts, I wouldn’t know her if I tripped over her.

I wonder how much I should embrace my own anonymity.  Dialogue from the park below is clearly audible from my balcony.  Does the sound travel as well in the other direction?   How about from the adjacent kitchen, if the windows are open?     What is it OK to discuss in these semi-exposed places?   Plants and window blinds provide a pretty good visual screen.    Anyway, I know that I don’t remember the faces of passers-by, even if they’re making a memorable scene; there’s no reason to believe they’d remember mine.

On the other hand:  they would know where I live.

One of the benefits of living in a relatively small space is that you can keep track of your stuff.   Things would disappear for weeks into the crevices of my rambling Victorian.   But in my current four-room apartment, it is much harder to lose things.

Except when it’s not.   A pair of sandals evaporates for 24-hours; I can’t find them anywhere.   In the end it turns out to be a case of carpet camouflage.   Turns out that when you move, it doesn’t improve your eyesight.

I have to find a new yoga studio.  This is a big deal, because I do yoga kind of a lot, and I was deeply attached to my old one.   Down Under Yoga has reliably excellent teachers.  They got me started on the practice five years ago, and the Newton studio felt very much like home.  Plus, I sat squarely in the middle of the demographic.   There were younger people, sure; but also older ones, and lots and lots of middle-aged ones like me.   There is comfort in that: at Down Under, I was never the only person modifying a pose for creaky knees or sitting out an arm balance.

I do find another yoga studio, quite close to our new home.  Coolidge Yoga is also reliably excellent.  But it does skew young (what with all these young parents moving out of the city before their kids hit school age).  Here I am often the only person padding my knees or skipping the arm balance.    One time I bring my husband, just so I won’t be the only middle-ager in the room.

And I bring my daughter, a favorite yoga buddy.   She enjoys class but points out an issue with Shiva, who occupies a mural on one wall of the storefront studio.   To be specific:  Shiva has no nipples. 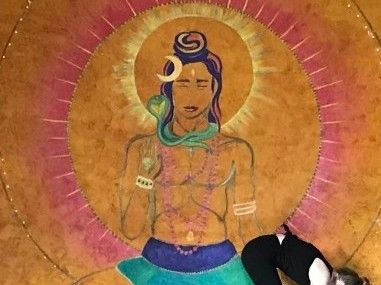 I am not sure sure.  Look at his necklaces.  Is it truly the case that Shiva has no nipples?  Or is it just a case of strategically-placed accessories, sort of the way that a soft-porn mermaid might drape her hair?

This question turns out to be a fine topic for rumination in those moments of quiet meditation, when I get bored of focusing on my breath.

Parking is an adventure.    Our street is cleaned every Wednesday between 8 and 12, alternate sides each week.   So if you are not lucky enough to nail a spot earlier in the week on the proper side of the street, you have to get up early each Wednesday and move your car before the tow trucks arrive (which they do, promptly at 8:00, every single week).

The challenge is that virtually every street in the neighborhood is on the same Wednesday schedule—I know, because I have spent what seems like hours driving around on Tuesday nights, pulling into tight spaces only to check the parking signs, and then pulling back out when I realize that this street, too, is set to empty before 8:00 am on Wednesday.   So once a week, the entire South End loses half of its parking.

I have found one location where the streets are cleaned from 12 am to 7 am on Wednesdays.  So if I get into my car at 6:54 am on a Wednesday morning, I can pull in right at 7:00 and my car will be safe from towing for another week.

I could tell you where this spot is.   But then I would have to kill you.

Parking is tight even at the best of times.   I drive quite little these days, mostly to events outside the city like a cappella group rehearsals or book group meetings.  One Thursday I get back late from my book group, 10:30 or so, and there are no spots to be had on my street, nor on either of the parallel streets.  After driving around for a while I do find a spot around the corner on Columbus Ave.    It is a commercial stretch, but the sign says that residents are exempt from the general 2-hour limit.  I check this sign three times before heading to bed. 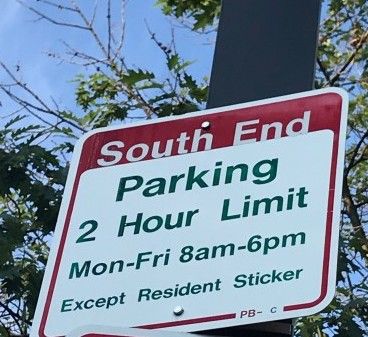 The next morning, Friday, some spots open up on my block and I think it might be nice to move into a resident-only space, freeing up my spot on Columbus Ave. for the local businesses.   But my car is nowhere to be found.  Because here is the sign I did not check the previous night, even once. 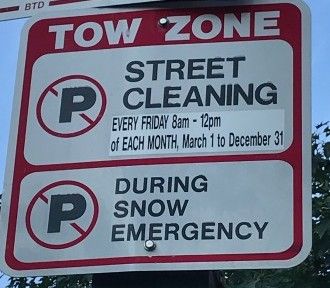 I have parked on the only street in the South End that gets swept on Friday rather than Wednesday.   Too bad for me.

Turns out that the City of Boston makes it relatively easy to locate your car.   You can look up the plate on their website, and instantly retrieve the phone number of the towing company who has hauled your vehicle away.   In fact, the City of Boston offers to make it even more convenient:  register your car, and they will send you a text with this information every time they tow you!   You don't have to lift a finger.

I feel grateful to live in a city with such a robust commitment to customer service.