This will be short:  I have only a few minutes to write, while the lemons I’ve just blanched are still piping hot.     When they’ve cooled enough to handle, I’ll slice them, pack them in salt, and set them aside to ferment.  Preserved lemons are umami magic, adding depth and brightness to just about any savory dish.   But they’re hard to find, and pricey.  So I make my own. 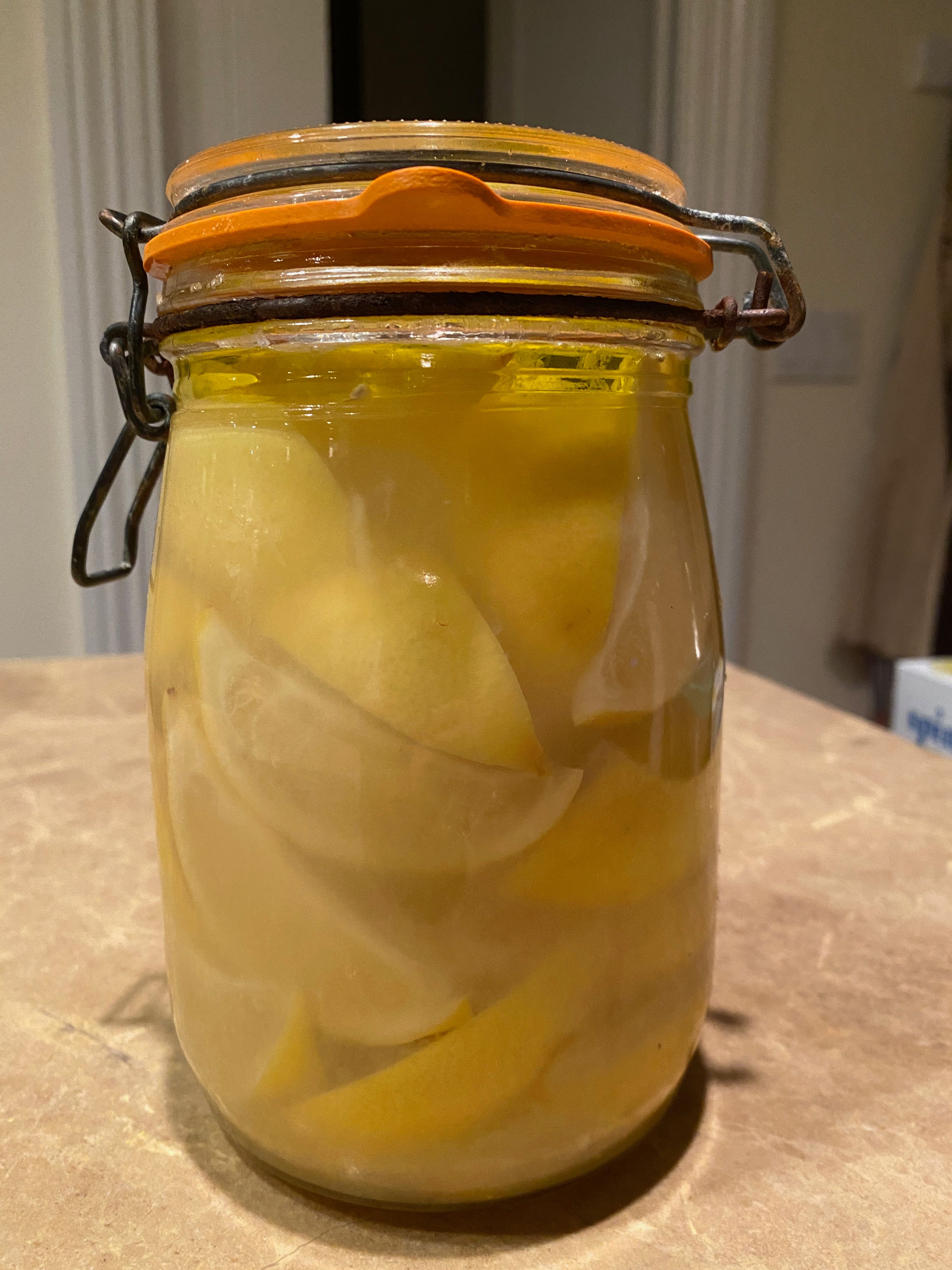 I’ve been baking my own bread for decades.   It’s a short hop from bread to pizza dough; and once you’re making your own dough, storebought sauce really won’t do. 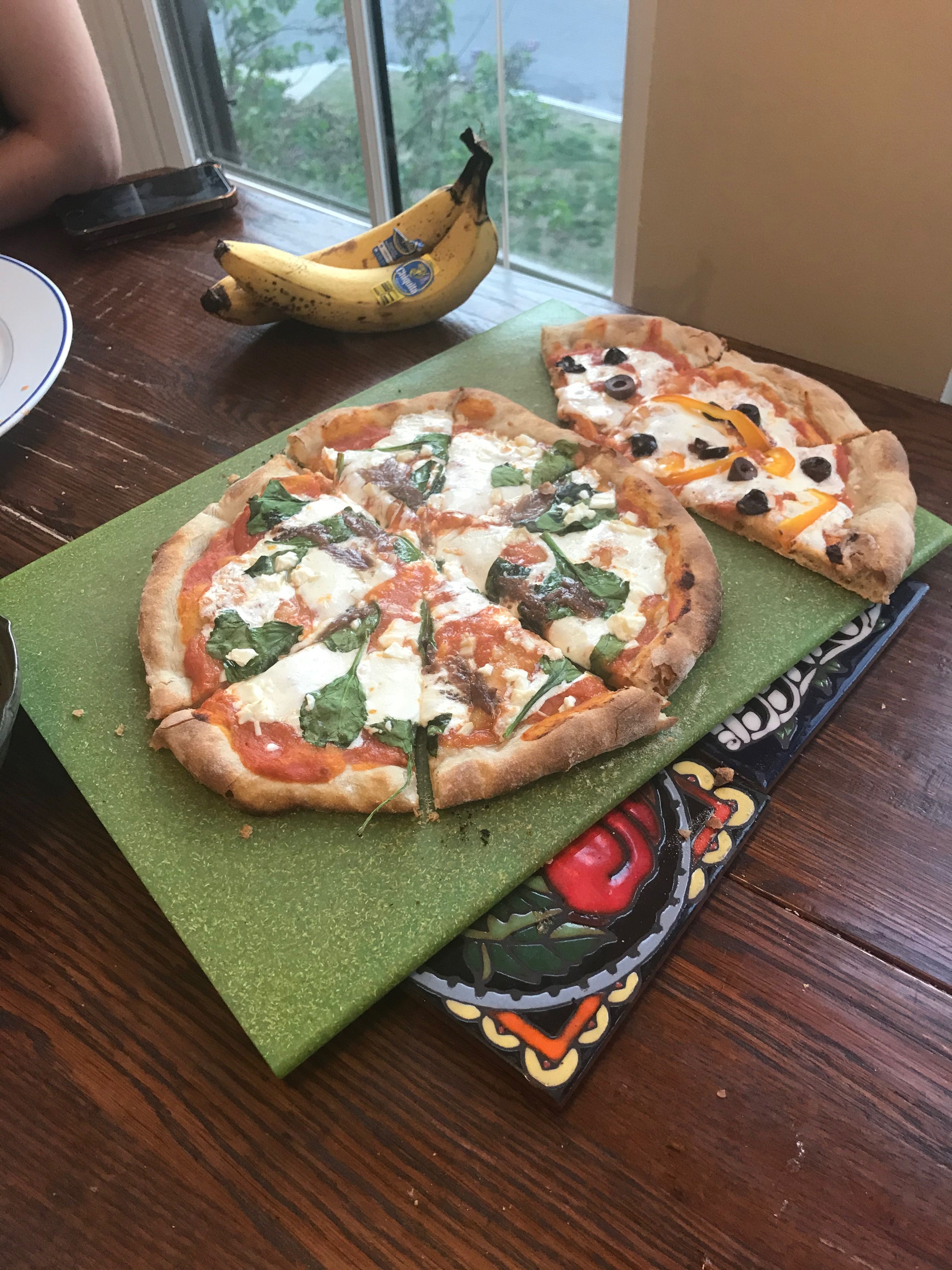 For a while, I even played around with making my own mozzarella cheese.   You need the right milk to make cheese:  if it’s been heated beyond a certain point in the pasteurization process, the curds won’t set.   On one occasion I went through three gallons of milk, driving back to the store three times, buying increasingly expensive and virtuous varieties (organic, then local and organic, then local, organic and un-homogenized) before I managed to produce a pound of cheese.  I gave it up after that:  the DIY cheese tasted good enough, but I just couldn’t stomach the carbon footprint.

I have not, however, given up entirely on homemade dairy products.   Several of my friends are great fans of the yoghurt sold at one particular Greek market in Belmont.   I also love this yoghurt, but I’m not about to take a 20-minute drive just to buy it!   Instead, I’ve figured out how to make a pretty good approximation at home.  All I have to do is walk to the one market that sells the special milk; heat it until it reaches exactly 180 degrees; test the temperature periodically over the next hour or so until it has cooled to 115; mix it with the yoghurt culture; ferment it in the Instant Pot overnight; cool it for four hours in the fridge, strain it for 12-24 hours, and then wash and dry the Instant Pot, the strainer, the thermometer, and all the utensils.   Voila! 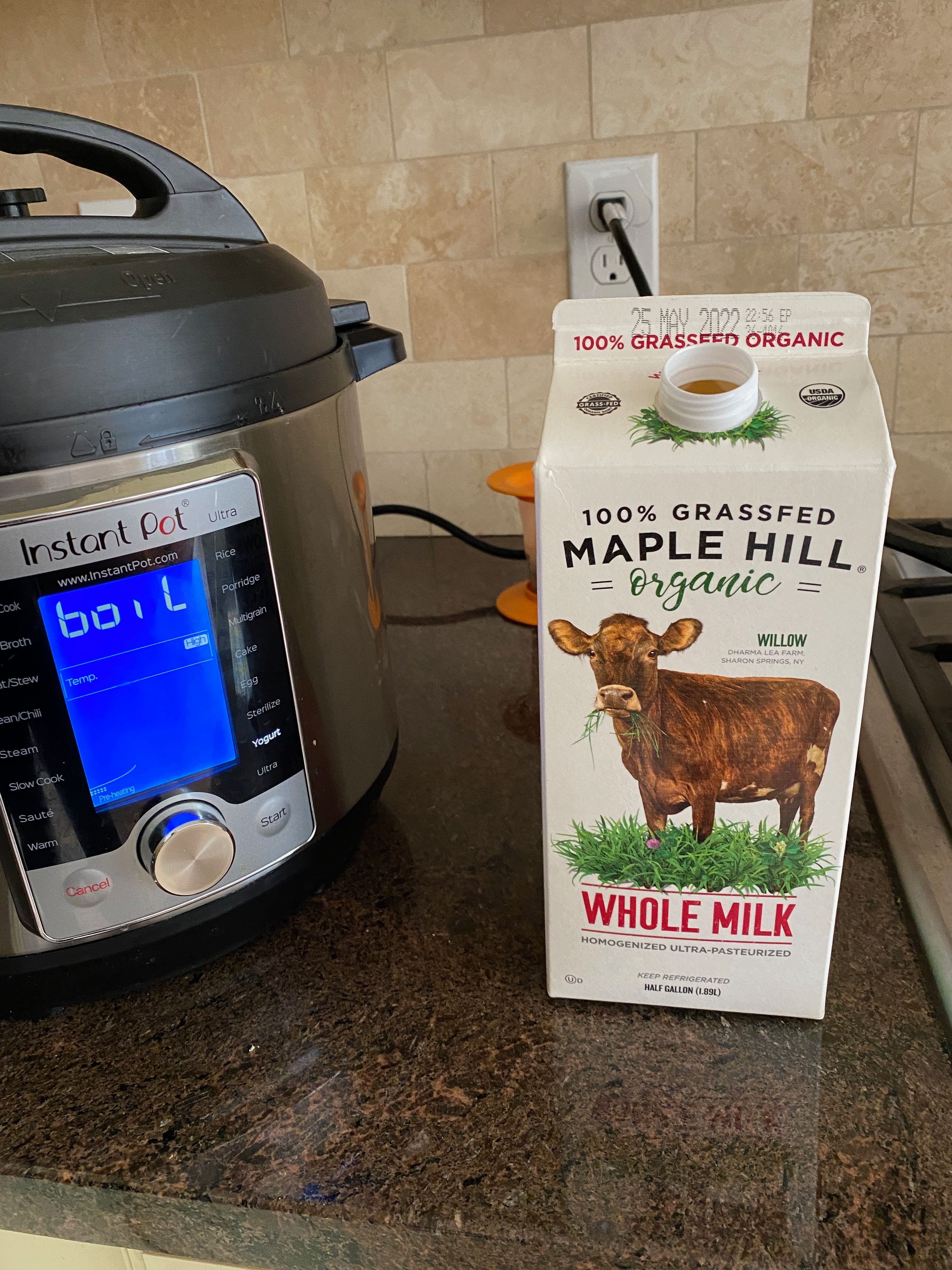 I don’t understand why everyone doesn’t make their own yoghurt.

Early in my marriage, when we were living in body-obsessed Los Angeles, Steve and I bought a bottle of salad dressing that boasted delicious flavor with no salt, sugar or fat.   We discovered that it was in fact quite tasty…..after we’d added salt, sugar and fat.   I haven’t bought a bottle of salad dressing since.   It’s so easy to make, and so much less messy than funneling sugar, salt and oil into the narrow necks of those store-bought bottles.

Some of my DIY projects are the results of simple over-abundance of ingredients, most often veggies from my CSA that I can’t bear to just toss in the compost.  When I get too many Napa cabbages, I make kimchi.   Pickled turnips turn a lovely shade of purple if you throw in a beet.   An overabundance of jalapenos, when pickled, take up much less space than the fresh ones. 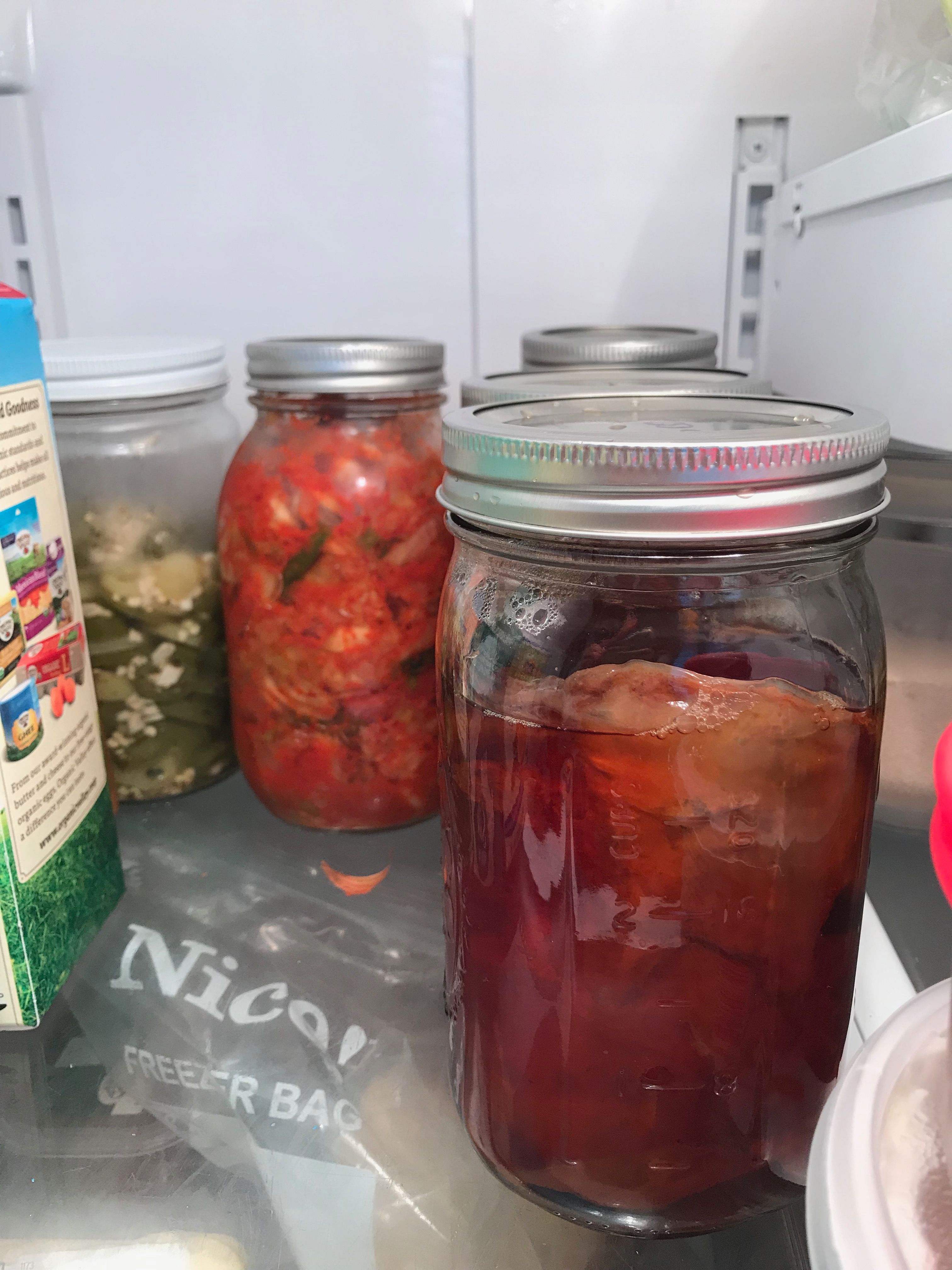 And three or four months later, when I finally end up composting the uneaten kimchi, pickled turnips and jalapenos, I know that at least I gave it the old college try.

A couple of years ago I started making kombucha.   To brew it you need a “SCOBY,” short for “symbiotic culture of bacteria and yeast.”   The SCOBY is a slimy, gray thing that you put into a gallon-sized jar of very sweet tea, and over time it digests the sugars and becomes intriguingly sour.   After a week or so you seal the kombucha up in airtight bottles and it self-carbonates.  Making kombucha keeps you on your toes because every so often a bottle becomes over-carbonated and explodes.  Not many DIY projects offer that sense of adventure! 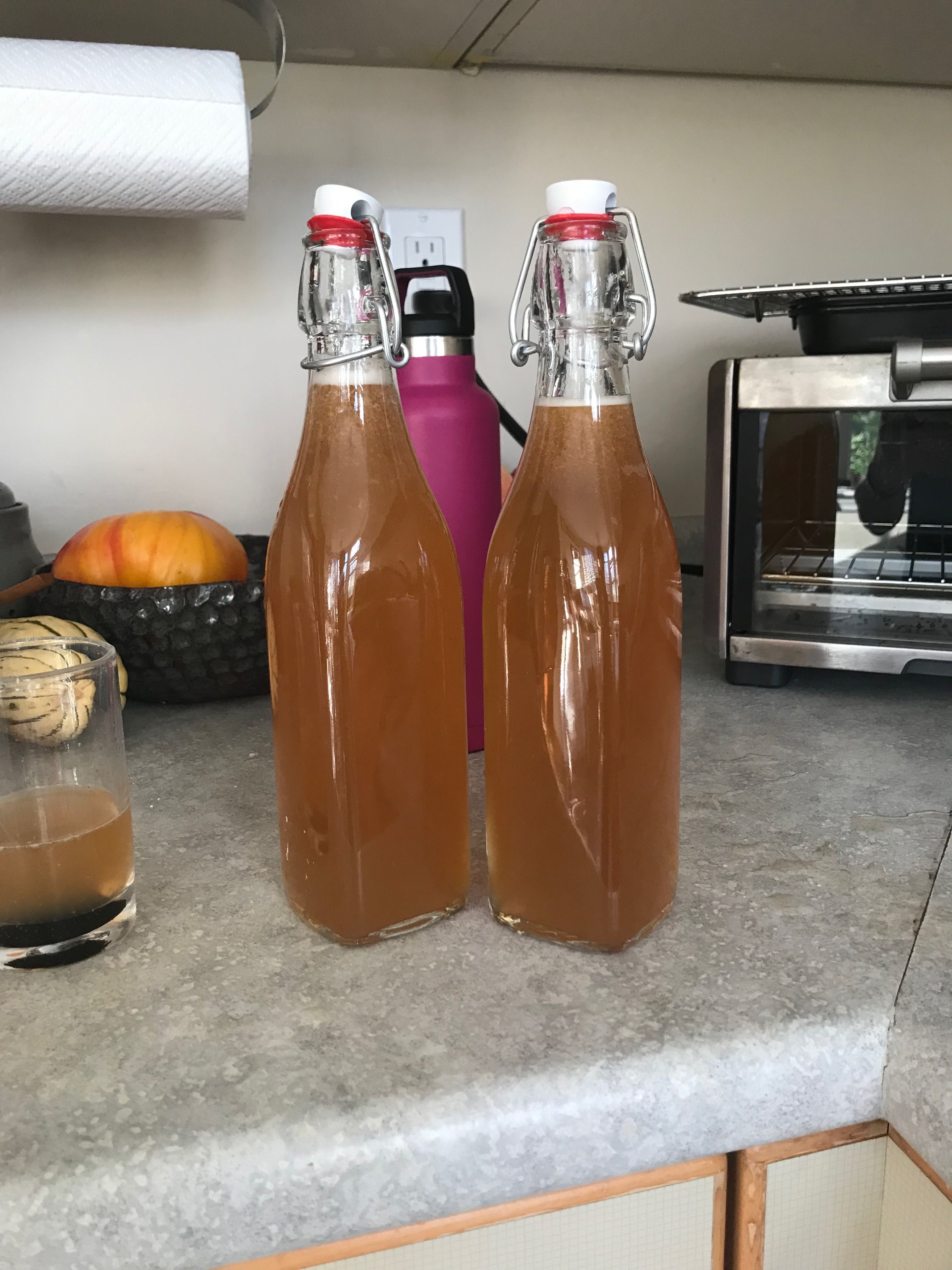 I kept the SCOBY for about three years, making kombucha a gallon at a time, religiously starting new batches to keep the SCOBY fed and vibrant.  I eventually gave it up when it occurred to me that kombucha is not something I actually like.

I was flipping through the NYTimes’ Cooking app recently when I was captivated by a Melissa Clark recipe for homemade mustard.   DIY mustard!   Maybe I should try it.

You know Melissa Clark: apostle of the no-fuss meal, best known for her cookbooks “Dinner in One” and “Dinner in an Instant.”

For the past few months, I have been making my own peanut butter.   Peanut butter is a staple food in our household – we eat a LOT of it – and a couple of years ago, we discovered a local brand called Gramps’.   It had a particularly pleasing texture, just a tiny bit grainy; and it never turned into a separated, oily mess the way that other natural peanut butters do.  I was a bit put off by paying $10 for a jar of peanut butter; but Steve insisted that it was worth every penny.

And then Gramps disappeared from store shelves:  according to our erstwhile supplier, Gramp had exited the PBusiness.   So I figured…you know what I figured.   You just toss a bunch of peanuts in the food processor!   And it turns out that if you stop the processor at just the right moment, before the PB becomes an oily mess, and it will have a pleasing, slightly grainy texture, just like Gramps’!   Of course, Gramps’ was a little darker than the peanut butter you get from tossing peanuts in the processor; so you’ll want to roast them a little more, shaking the pan every few minutes and staying right on top of it, because those babies will burn in a heartbeat. 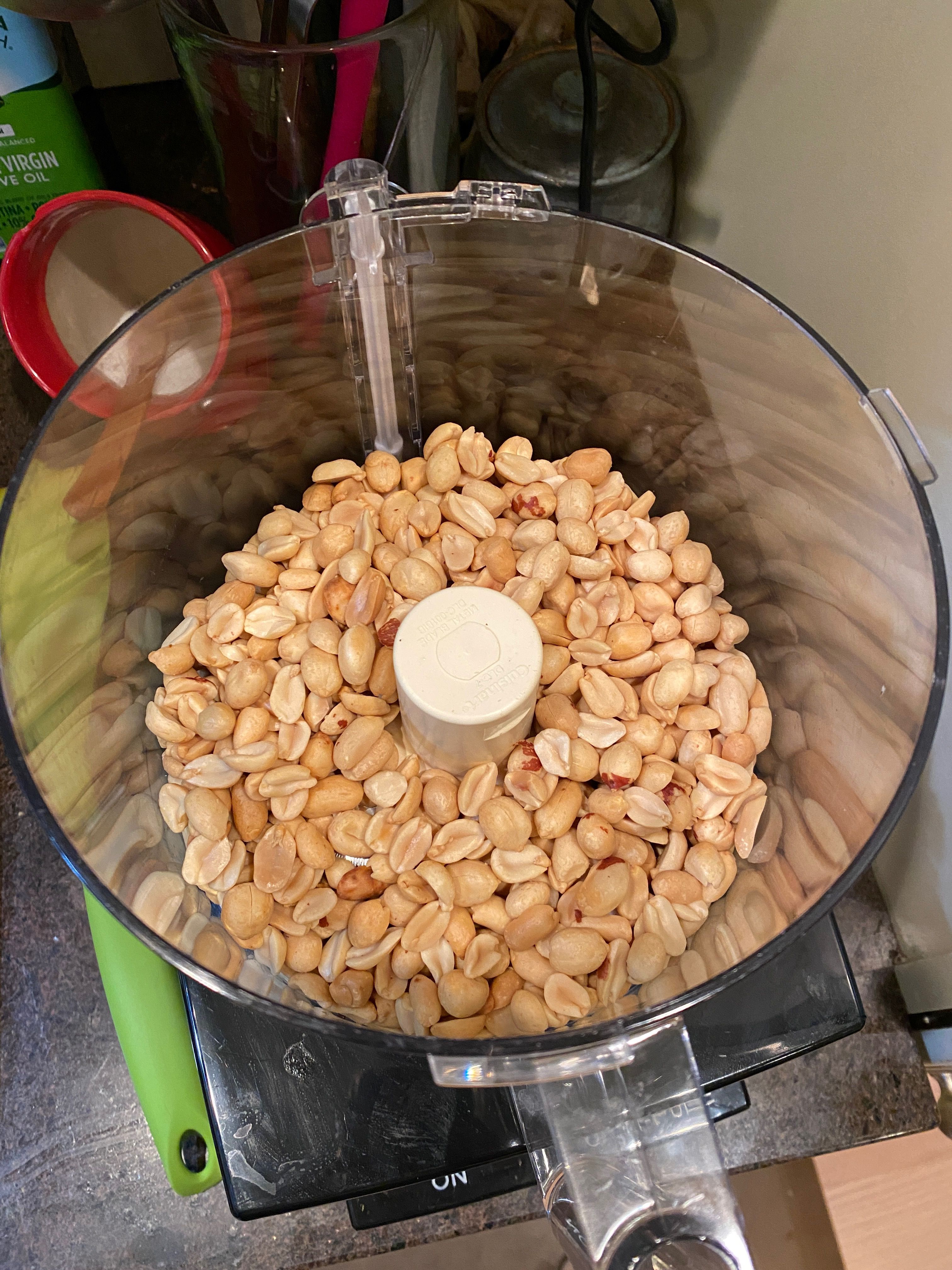 Trader Joe’s sells roasted peanuts for only $2.95 a pound.  (Trader Joe’s also sells peanut butter, for $3.95 a pound.)  I have been to business school, so I know that you have to account for opportunity cost as well as raw materials.  If I factor in my time, at, let’s say, my nonprofit billing rate, then each pound of peanut butter only costs me….let’s see….$75.87.

And now, if you’ll excuse me, I have to go slice my lemons.