We are deep into the process of Thanksgiving planning, which is always a pleasure.   It’s my favorite holiday, by a wide margin – there’s simply no greater pleasure than cooking for and eating with people I love.   It’s a day to which I always look forward with great anticipation.

But more than anticipation is required:  the meal does require some forethought.   The first order of business, naturally, is ordering the turkey.   The standard rule of thumb calls for 1 lb., or 16 oz., of turkey per person, or t = 16p.  Of course, the vegans will not be eating the turkey; so t = 16*(p-v).   Then again, the pound-per-person rule is based on a classic, 1950’s-style dinner in which there are three items on the plate (meat, starch and vegetable); if there are a large number of side dishes, which there generally are, then people are likely to eat less of the meat.    One pound of turkey offers about 5 oz. of meat, a ratio of 16:5.   Let’s say we can safely reduce the estimated meat consumption by about half an ounce for each incremental side dish, .5 * (16/5).  So, if d is the total quantity of dishes, then the amount of turkey needed is:

I go to the store and pre-order a Medium.

(Supplementary question:  what is the volume of vegan gravy (gv) required, as a function of the number of vegans (v)?

Both of my daughters are terrific cooks, and nearly as preoccupied with food as is their mother; so I am not entirely surprised when my younger daughter calls from her senior year of college, where she is busy contemplating the entire course of her professional future.  She calls to share the following epiphany:

This Thanksgiving, we need to serve polenta.

Which raises the interesting question:   what configuration of carbs is optimized for Thanksgiving?   We have, thus far, determined that the ideal set of pre-dessert Thanksgiving carbs includes three items: 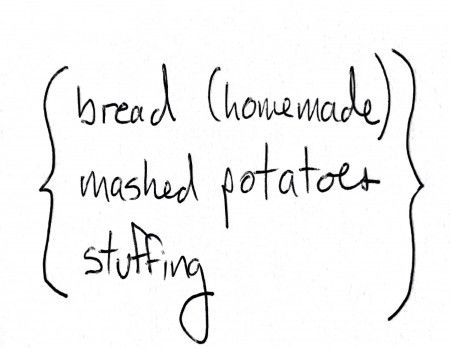 We have, thus far, determined sweet potatoes to be included in the set of Thanksgiving vegetables, most frequently populated as follows: 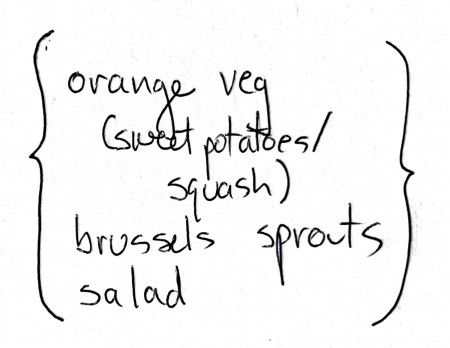 But plate optimization is a matter of texture as much as food groups.   Mashed potatoes and polenta both belong in the set of creamy, gloppy things, as do mashed or pureed sweet potatoes. 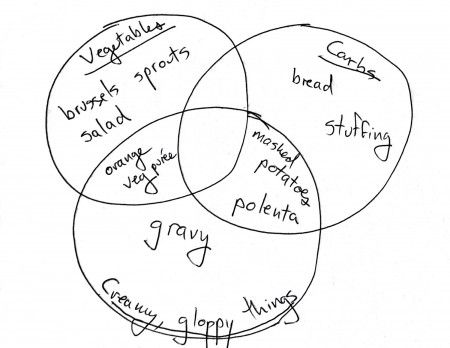 My instinct tells me to set the upper limit on the number of creamy, gloppy things at two, otherwise everyone’s Thanksgiving plates will disintegrate into soupy mess.   So we can roast the orange vegetables and take them off that list.     If we add polenta, we could fire the mashed potatoes, which would reduce the set of creamy, gloppy items to two, and the set of pre-dessert carbs to three: 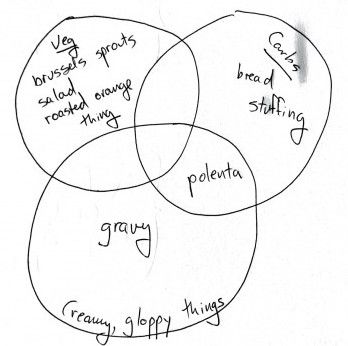 Julia, dear, I am so sorry to say this, but I'm afraid that the proper amount of polenta for Thanksgiving is: 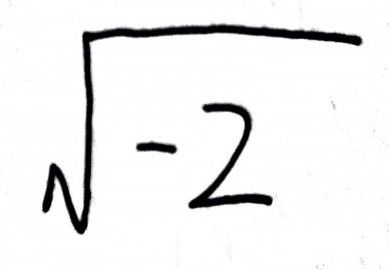 Seating will be an interesting issue this Thanksgiving.  We’ve moved, and no longer have a big dining room table – nor, for that matter, do we have a dining room.  But we do have a large-ish, round table, diameter of 47 inches... 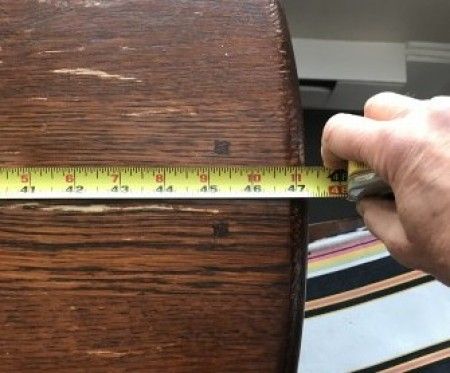 ...for which we have one leaf, which extends the circle to an oval by adding 18 inches to each side.    Received wisdom and Martha Stewart say that you need 18 linear inches per guest.  So our maximum list this year is: 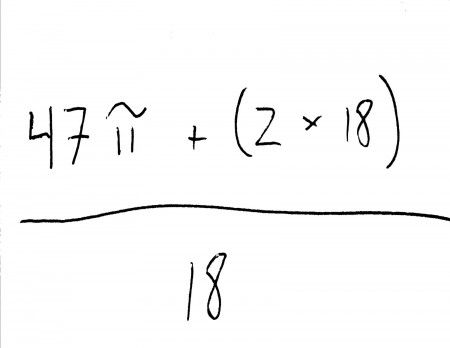 Which works out to about ten, which is good news, since I think we only have nine!   The only problem is that, what with the move and so on, we only have eight chairs.

So, guys:  who's volunteering to eat in the bedroom?

Then there is seating.   Let’s say that Brian and Linda are lefties, and can only sit at an end seat, or next to another lefty.   Nobody is supposed to sit next to their spouse or romantic partner.   Laurie is married to Steve; Mark is married to Linda; and Brian and Rebecca are a couple.  Laurie favors her right ear and thus needs to sit at a left-hand table edge.   If Julia and Claire want to sit together, Henry insists on an end seat, and Steve wants to sit at the end closest to the kitchen, then who has to eat in the bedroom?

Enough of this.  I'm off to make a few pie crusts to stick in the freezer, and then to start on the linear programming model so I can figure out when everything goes into the oven on the big day.

And then I'm going to register to sit for the SATs.  Because, 38 years after the fact, I think I'm finally ready.