It's my first Halloween in my new urban neighborhood, and signs of the holiday are everywhere. 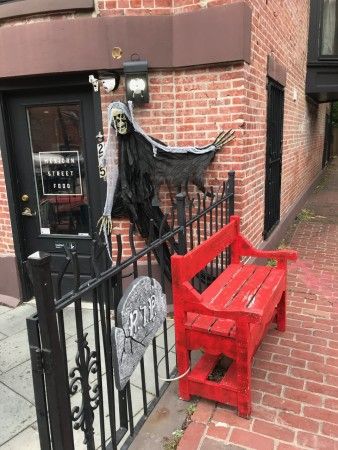 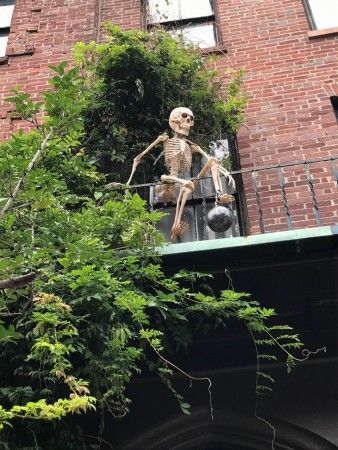 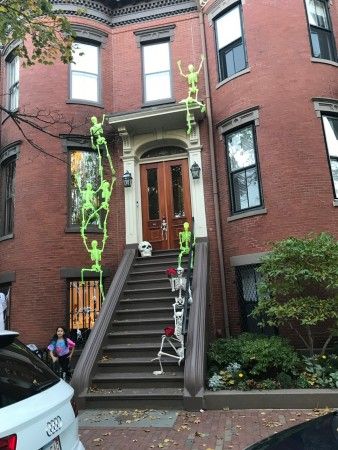 I couldn't be more pleased.   I adore Halloween; I always have.  I love the goofy exuberance of it all:  the creativity of the costumes, the spirit of generosity, the community around a common purpose (delighting the neighborhood's children):  it honors so many of my most deeply-cherished values.

There was a point when our local elementary school in the town where I used to live decided to stop in-school celebrations of Halloween, because there are some students and teachers who have religious objections to the holiday.    I was a little sad – the more Halloween, the better, in my world view – but I recognize that it was the right call.   Public schools should certainly limit themselves to unequivocally secular holidays.   I have vivid memories of the Christmas pageant put on by my third grade class at Brookside Elementary School, an old-school re-enactment of the birth of the baby Jesus.   I recall being somewhat stymied by the whole proceeding.   First, I was confused by the whole manger situation, and by the casual presentation of key characters (Mary, Joseph, some Kings) without what I considered to be critical exposition of their backstories.    Second, as an 8-year-old diva, I knew in my heart that my place was at center stage, in a leading role.    Mrs. Davidoff, on the other hand, had judged it best to keep the Jewish kids out of the creche; so I was stuck singing “Silent Night” from the audience, a grave misuse of my obvious gifts.

So, right:  if Halloween is problematic for some for religious reasons, it doesn't belong in the public schools.  But out of school:  it really is the best.   Costumes!  My own favorite from my childhood involved co-opting my father’s red velour bathrobe.  I made a crown, added a pipe and a bowl, and voila!  I was Old King Cole.   Not a soul knew who I was; but I knew it was brilliant.    Some decades later my older daughter transformed a class project on Elizabeth Cady Stanton into a wicked good Queen Victoria costume.    People guessed “witch,” “princess,” or “grim reaper” – and I suppose they weren’t wrong, as Queen V. really was all three.   My younger child turned a wig, a plastic guitar and a sparkly jacket into a Velvet Elvis costume; eventually she tired of explaining and switched her identity to Paul McCartney.  Who was, in fact, kind of a Velvet Elvis.   Costume creation, at its best, is really just art with found objects, leading to surprising insights for creator and viewer alike.

Of course, Halloween costumes are not always so artful; just ask Justin Trudeau, or Virginia governor Ralph Northam.  Surely, they should have known that blackface was a hurtful choice.   Although back in the day, there were all sorts of costumes about which we didn't think twice.   Put on some torn and dirty clothes, rub some dirt on your face, and you were a bum!    A few scarves, a long skirt and some black eyeliner:  instant Gypsy!   A feather in your hair and some lipstick stripes on your cheeks:  you were an Indian.    Few today would defend these costumes as anything other than deeply offensive to homeless people, Romany, or Native Americans, respectively.

Cross-dressing was once an uncontroversial Halloween option.    A decade ago, one of my favorite Halloween traditions was the dad up the street who put on a Glenda-the-Good-Witch costume, chest hair protruding from his sparkly pink bodice, five-o-clock shadow  on his chin.  “Hey kids,” he’d say in his unaltered baritone, “want some candy?”   It was hilarious.   I wonder:  could he do that now?    Would he be seen as mocking the transgender community?  Or would he be praised for bravely rejecting the gender to which he’d been assigned at birth: Newton’s own Caitlin Jenner!   Who's to say?

And then, of course, there's the matter of candy. 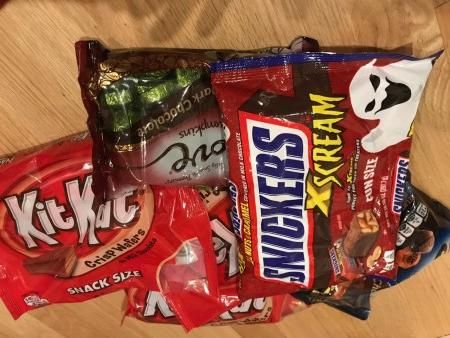 Childhood obesity is an epidemic, or so it seems.   By giving kids sugary candy, are we dooming them to a life of Metabolic Complex?  Snickers or Reese’s could trigger anaphylactic shock in children with peanut allergies.    Twix or Kitkats could cause no end of digestive woes in children with Celiac disorder. Almond Joy bars have soy (not to mention almonds!  Killers for those allergic to tree nuts); Three Musketeers bars have egg whites.  Allergens, all!    Not to mention the many candy bars with palm oil – Baby Ruth, Skittles, Butterfingers.  Palm oil -- the monoculture that is destroying the rainforests in Indonesia!   And then there's all the extra packaging for those tiny little candy bars.

I could just skip the candy this year and give out little toys – nobody would get poisoned, at the very least.    Oriental Trading Company has a ready-made selection: 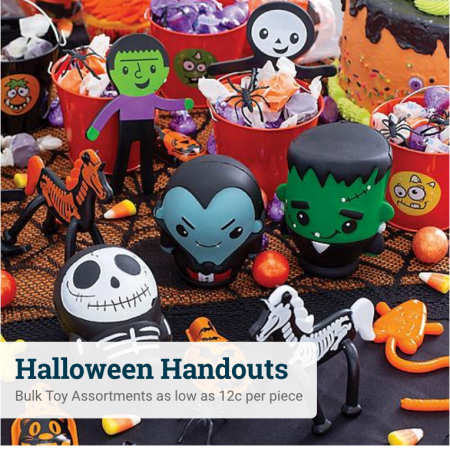 But this garbage is just landfill waiting to happen:  more plastic in a plastic-laden world.  Perhaps I could give out pencils?  There are all different shades and fun designs.   That would be a functional item to distribute!   Except that pencils are BORING.    The point is to delight the children, not to elicit epic eyerolls.   And anyway, isn’t the name “Oriental Trading Company” itself a little suspect, with its stereotypical images of the Chinese purveyors of cheap goods? 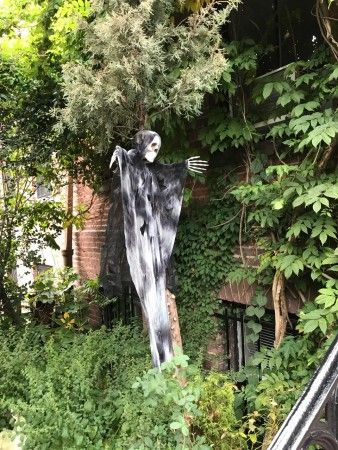 This year, I am going to celebrate Halloween in a way that truly embraces all of my values.   I will prepare a big batch of healthy treats, made with a gluten-free whole grain (I’m thinking kamut), sweetened with agave nectar and moistened with a sustainably-harvested oil.   (I will avoid pumpkin, which is relatively high on the FODMAP scale, and which might thus prove troublesome for children with Irritable Bowel Syndrome.)  I will wrap each of these treats in unbleached, compostable parchment paper.

And then, because the children will find them disgusting and because in any event their parents won't let them eat unwrapped stuff from strangers, I will just go ahead and throw them all into the compost bin myself.