Picking up the pencil

This past Wednesday night, my friend Mary Elise invited me to a Shawn Colvin and Mary Chapin Carpenter concert.   I accepted, with great enthusiasm, and it was wonderful; although I have to admit that they are both musicians who I’ve always found to be pleasant but not particularly inspiring.

On Wednesday night, though, I was inspired.  These women are very engaging performers, really good musicians.   They are fully at ease with themselves and their music.  They seem utterly unafraid of so many things:   of showing their affection for each other onstage, of long instrumental bridges, of sentimentality, of letting their songs take up time and space.    Sometimes they even repeat the first verse again at the end of the song.

Repeating verses:   are you allowed to do that?

I have a thing about repetition.   I worry about using the same rhymes, the same themes, or the same chord progressions from one song to another, even songs written years apart.   I sang one song twice in the same concert series, in performances fully three years apart; and I still feel a little cheap about it.

There are so many other things of which I’m afraid as a songwriter.   Musical predictability.   Insufficient wit.   Excessive length.

But these ladies were fearless, and fabulous.    Even better: they talked explicitly about their songwriting processes, and I drank up every word.   Mary Chapin Carpenter described taking walks when she’s stuck on a riff or a lyric; Shawn Colvin talked about procrastinating.  I take walks when I’m stuck!   And I am really, really good at procrastinating.

All the best songs, they both agreed, are about heartache.

Mostly they talked about sitting down at the kitchen table and just writing.

As I listened, I vowed to embrace this fearlessness and just get down to work.   The very next morning I sat down to write a list of all of the things about which I might write songs.  Here is the list:

I am thinking about pencils because I just found a big bag of them that somehow survived my recent move. 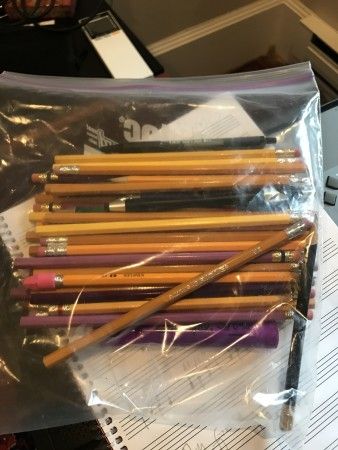 I got rid of tons of other office supplies; but couldn’t quite part with the pencils, despite the fact that they are of shrinking utility in my increasingly paperless world.   Sort of like Mary Chapin Carpenter’s song, This Shirt, about an old shirt she can’t bring herself to throw out because it carries so many memories.  Only I’ve already written a song about a shirt.

So I sat down to write this song about pencils.   It is also about heartache, because all the best songs apparently are.   You can listen to it here:

But that thing about repeating the first verse again at the end:  I’m afraid that’s just a bridge too far.